Free RPG Day is this weekend, Saturday the 17th, and Chris Ellis and I will be running Dungeon Crawl Classics and Mutant Crawl Classics at Doc’s Comics & Games in Frisco, Texas. So if you’re in the DFW area and want to adventure like it’s 1974, take a look at the flyers below then drop by or call to reserve a seat… 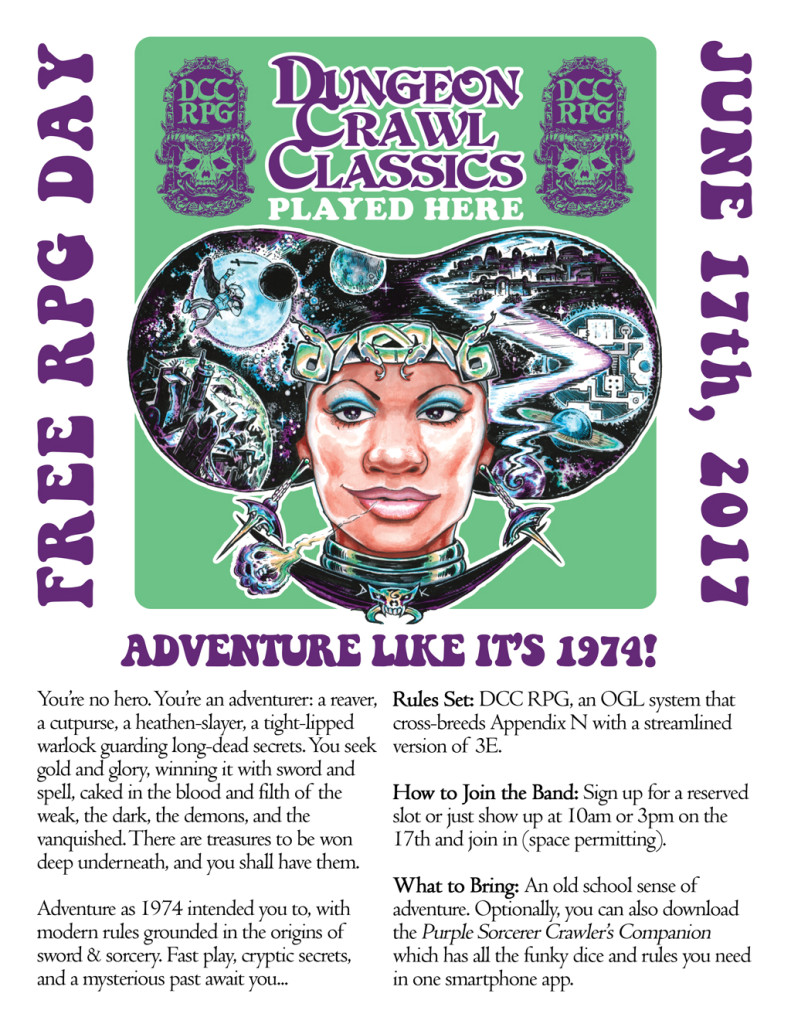 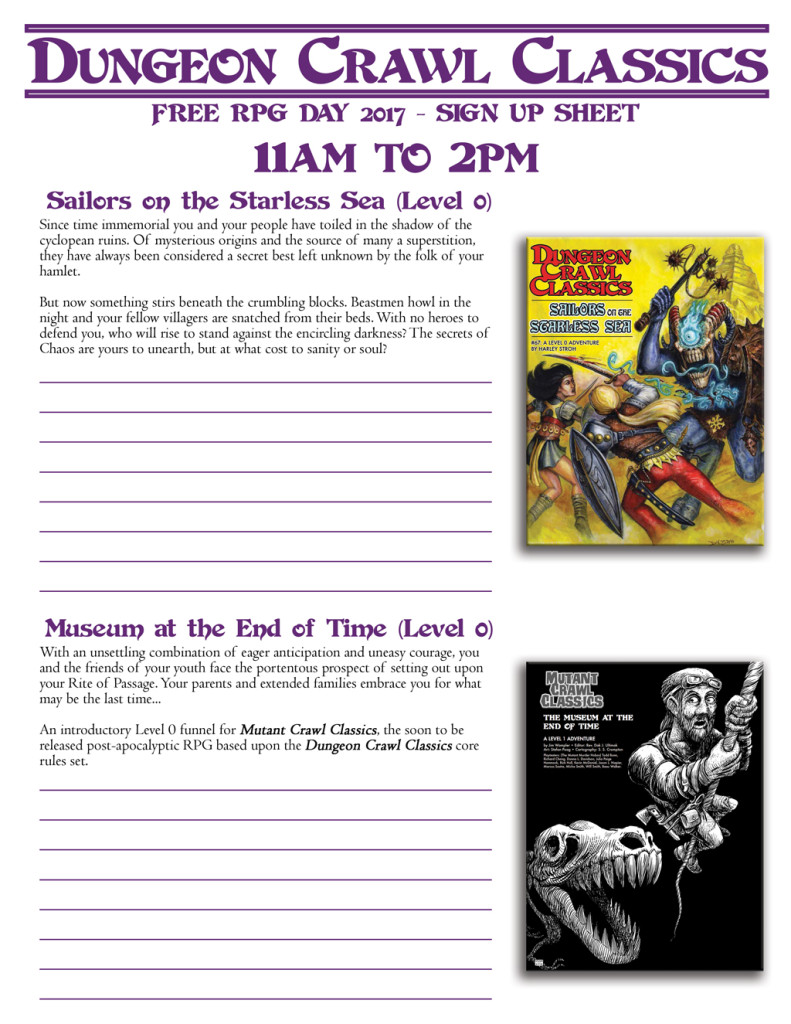 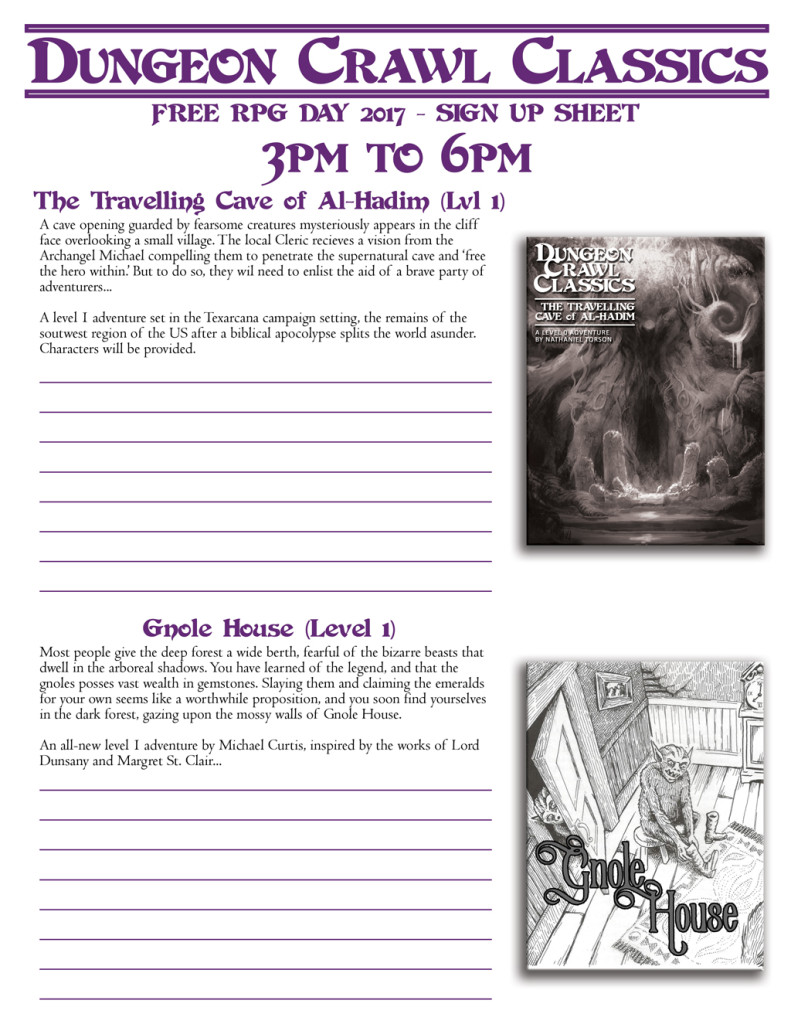 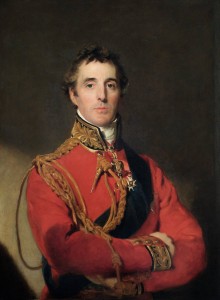 The school year is over, I’ve turned the student’s grades in and I have a little more free time (more than I can afford, actually), so on with the motley.

Up to this point, it has all been about the dice and the player, but our final step is based on the Judge and his plans for the characters and what kind of stories he wants to tell.

I should point out that the Men & Muskets booklet will generate characters who are mainly soldiers, and soldiers in the Peninsular War, at that. This does not mean the whole game will be set solely in that period and with those sorts of character. Indeed, I think that our literature professor, who would have enjoyed the complex interplay of characters from across the spectrum in such works as War & Peace, would have been more inclined to focus his campaigns on multiple characters in multiple arenas of conflict, both martial and social.

In effect, I believe he would have come up with some form of Troupe play, where each player had multiple characters across the battlefield as well as in the halls and drawing rooms of the powerful aristocrats, and even in the dirt and dung of lower class life. A single adventure would play more like a novel for Dr. Luther, with the scenes going from a group of infantry, to their superiors at HQ to the family woes at home to the petty power struggles of politicians and merchants trying to make hay out of the conflict. War & Peace in RPG form.

At the same time, I think he would recognize that the simplest way to explain how to play is to start with the simplest of stories: that of the soldier in the field and their day to day interactions. So that is what Men & Muskets will start with. Book 2 of the basic set, Captains & Campaigns, will expand the game into slightly larger territory, and later expansion supplements, like Navies & Nabobs, Blackamoor (colonial settings) and  Airs & Aristocracy (basically, the ‘Jane Austen’ supplement), will introduce new arenas and styles of play.

But for now, each player will be encouraged to roll up 3 characters who to give the Judge the largest selection of protagonists to draw from when creating adventures in the Peninsular War. And for most of these, he will need to determine their Rank and Unit.

If the Judge desires, unit ranks can be rolled for these just like everything else, and that is the default assumption. The lower and middles classes roll on the Enlisted table: 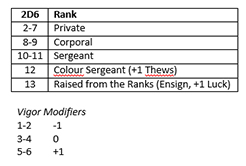 The Raised From the Ranks result indicates that the character started out as an enlisted man, but after some act of extraordinary service (like taking a French Eagle) or bravery (surviving as part of a successful Forlorn Hope), they were elevated from the rank of Sergeant to Ensign. Such a promotion is as much of a curse as a blessing, due to the ruinous fees that are required to keep pace with the officer’s lifestyle, and the derision, from both officers and enlisted, that it attracts. Due to the extremely tight class structure of English society, such men were considered ‘neither fish nor fowl’ and their former mates were often as hostile to them as their new ‘peers’ for daring to rise above their natural place.

The Upper Classes may attempt to purchase a commission by making a Wealth roll OR they have the option of forgoing that and rolling randomly for a rank earned through battlefield promotion (which earns them a +1 to their Soldier rank, as recompense). 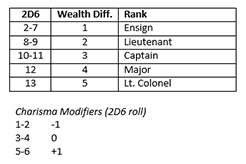 Officer and NCO Numbers Per Battalion 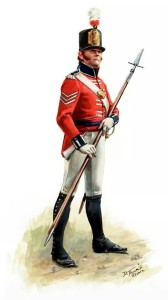 If the Judge is following the organizational structure of a British army in 1812, there may only be one Lt. Col per Battalion, 1 Major per ½ Battalion, and 1 Captain, 2 Lieutenants and 1 Ensign per Company. Likewise, for the enlisted ranks, there are a maximum of 2 sergeants and 3 corporals per Company.

If there are too many officers of a particular rank at the level of play desired by the Judge (Lt. Cols at Battalion, Majors at ½ Battalion, Captains/Lieutenants/Ensigns at Company, etc.), then the person with the lower social rank is reduced in military rank one step. Officers were often given brevet ranks upon the death of their former superior, which could later be taken away if someone of greater position and more money purchased a commission, so we must assume that this is the case here.

Instead of randomly determining ranks, the Judge may assign ranks at will to fit whatever campaign plans they have. For example, he might have decided to start the characters off as prisoners of the French, in which case, he might want all of the characters to be enlisted personnel. Or, he might want them to be part of a small exploring unit, with a junior officer or two and some experienced rankers scouting the frontier under the command of one of Wellington’s senior exploring officers.

There are a great many historical battalions the Judge my choose to assign the characters to, and there is no reason that he has to assign them all to the same one. As I mentioned earlier, Luther would have likely indulged in Troupe style play, where the players might have characters in a few different units or places to capture the bigger picture style of the great literary epics.

A player might have an officer in the historical 95th Rifles, a Sgt. in the fictional South Essex and a spy in the French army, and the Judge might jump between those characters during the same adventure, maybe even in the same session of play, to resolve bits of action that might influence other parts of the adventure. During major historical events, like the Battle of Barrosa, a player might have several characters all engaged in different parts of the battlefield as well as back politicking and spying behind the lines, so that a single major battle like that might take several sessions to resolve.

Also, like the characters in the original D&D campaigns, I think that character’s in Luther’s games would have come and go based on availability and the adventures at hand. Captain Vaughn of the historical 95th Rifles, for example, might end up serving with the fictional South Essex battalion after his unit is seconded there for a special mission to contact and help Spanish partisans, along with an officer from the diplomatic corp and several rankers from a depleted company of the 33rd Fusiliers.

There are historical lists of the battalions actually involved in the war, but it’s easy to come up with new ones who might be slotted into the historical narrative without causing it to deviate too greatly. and the book will have a few suggestions along those lines.

Finally, the Judge may decide to override the dice in other parts of chargen to ensure a better fit, skipping the roll for Culture and just deciding that all the character’s will be Irish so that they fit into the 27th Inniskilling regiment, for example, in order to narrow the focus of his campaign.

And that about wraps up character generation. With this and the basic rules sorted, there is enough to create a few characters and take the system for a spin. As a helpful little aid for anyone who wants to try it out, I’ve created a Quick Play PDF with all the relevant info from the last half dozen posts, whittled down to bare essentials so you can quickly generate some characters and try them out. If you do, leave me their stats and your impressions in the comments section below…