I am a busy man. I teach tech and game design in Middle School, game aesthetics at a Community College, and make games, but actual game design is more of a side hustle. I love to do it because it is my art, my form of expression, and essentially who I am, but not something I rely upon to support my family. It is much too volatile an industry for such a purpose, and the fact that Richard Garfield, one of the design giants, is still a professor of math, only reinforces that opinion (and he is just one of many game designers who also teach for a living).

So, it should come as no surprise that when it comes to game art, I don’t have time to create 150+ unique illustrations for a card game like BoHM:ToR. I barely get enough time to work on the game itself, so I rely on Adobe Stock and Creative Commons for a lot of my art needs. Occasionally, though, I can’t find an appropriate image, and I either have to commission a piece or do it myself (and the latter is more likely, as I am an artist by nature, and cheap by necessity). The interesting thing, however, is when that art turns back upon and inspires the design. And that is what this post is all about. 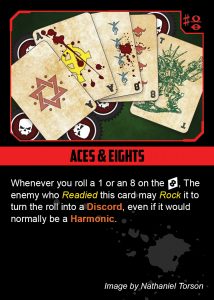 For my Aces & Eights card, it was clear that some rando picture of poker just wasn’t going to cut it. It occured to me that the cards used by the people in the 31st century would have evolved a great deal from those used by the folks of the 21st, just as our modern decks evolved from the Tarot style decks used in the 15th (which, contrary to popular belief, were not originally used for occult purposes). In fact, considering the way the civilization of the 31st century is organized, I figure a devolution back into a form of Tarot style Poker deck based on the Rocktagon, might be in order.

An image of custom cards and chips being a rather easy thing to mock up in Illustrator and Photoshop, I sat down one night and knocked out the art piece at the top of this post in a couple of hours, but being a person whose mind tends to worry a concept like a dog with a bone, It didn’t stop there, and I went ahead and figured out the structure for the whole deck, and started thinking about how it would be used.

The playing cards of the 31st century, much like those of the 21st, are primarily used for a variety of games, but they also serve a secondary function: reinforcing the presence of the Rocktogon in every aspect of life in the Metalsphere. As such, every facet of the deck emphasizes the metaphysical underpinnings of that unifying symbol. 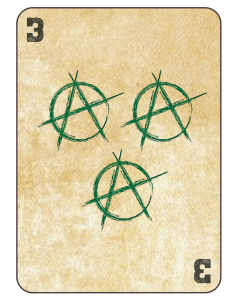 The current form of the deck became standardized in 2888 (hence the name), and contains eight suits, each representing one of the Eight Great Schools of Rock:

Each suit contains the following cards: 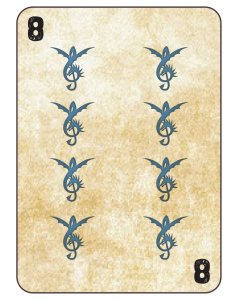 Not counting The Marauder (who exists outside the proper structure of the Rocktagon, anyway), there are 88 cards in the deck, two eights, which further reinforces the perceived mystical connection to the underlying structure of the metalhead’s universe. And in a throwback to ancient Earth superstition and charlantry, some espouse the esoteric energies of the cards and make a living giving divinitory readings (supposedly by ‘communing’ with the Saints of Rock). This practice varies considerably, from being almost ubiquitous amongst Sabbathites, to completely outlawed in Nazarite space, but almost all citizens believe, to one degree or the other, in the power of the cards to foretell the future. 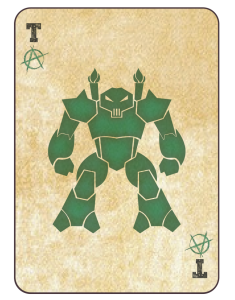 Despite the reverence paid to the symbolism of the cards (and the great pride individual owners take in their personally customized decks), the main use of an ’88 Deck is for gaming purposes, mostly gambling, and there are at least as many 31st century variations on 21st century Poker as there are cards in the deck. Other popular games include Galactic Supremacy (a strategic bluffing game where the cards represent conventional forces, Titan Riders and Military Leaders), Warp (a trick taking game akin to Spades crossed with Baccarat), and Rocktagon Rummy (essentially the same as Rummy, but with more suits).