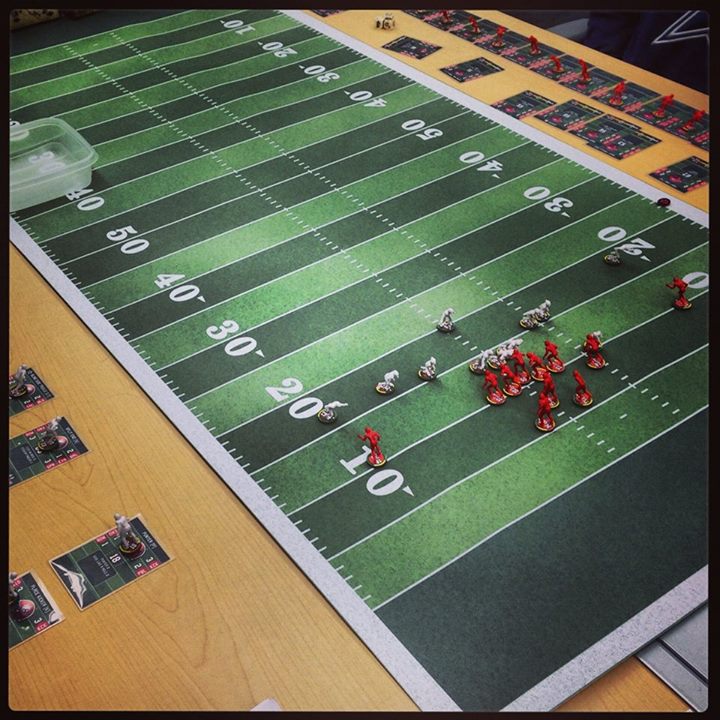 While For Glory! is being readied for a spring Kickstarter, playtesting has started on Quarterback Blitz, the table top miniature game of Professional Football.This will not only be another exciting new future product from Jabberwocky, but is also a Thesis Project for my MFA, so it is going to be scrutinized with academic intensity as well as my own OCD like attention to design detail.

As you can see from the image above, the game focuses on the one on one tactical interactions of individual players on the field, each one of which has his own Stat Card, describing his stats, skills and special abilities, like so: 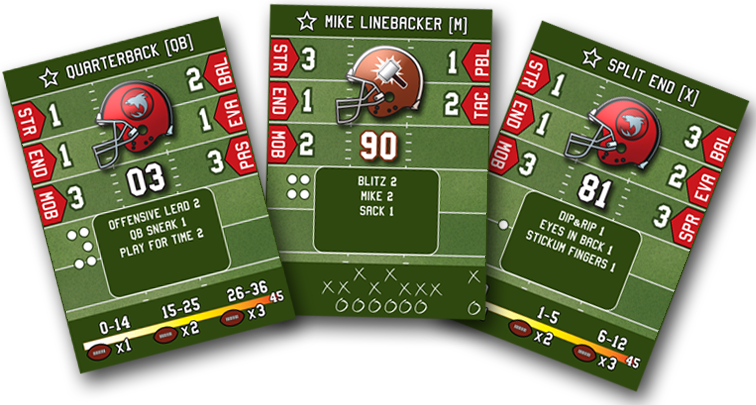 For each card, there is a corresponding miniature: currently, I’m using Tudor Electric Football models, clipped off of their stands and placed on 20mm round bases. They’re fairly small, and the models I plan to have made for the final game will be smaller still to fit in with the 1:72/25mm scale of the game, which everything is scaled to including the marks on the field. As such, jersey numbers will be kind of hard to see and, for the first time player, might not really define the position and where that player fits into the grand strategy of the Offense or the Defense. To provide for that, I’ve created specialized bases for each model:

Each Base has three vital pieces of information:

Player Position: Above we have a Quarterback, a Mike Linebacker and a Split End (a Wide Receiver on the weak end of the line). These are all represented by the actual letter codes used in most coaches’ playbooks so that when you look down at the field, you will see the play in physical form. A great tool for teaching basic formation structure.

Player Number: Another identifier that keys the player to the card, so if you have numerous non-specialized Linebackers or a gaggle of Rookie Tackles, you can tell them apart.

Other that that, the game has relatively few other pieces, the vast majority of which are specialized dice, including a set for Passing/Kicking, Ball-Handling, Blocking and Sprinting, as well as time, ball deviation, injury and penalty dice. Each set will have special icons instead of numbers (well, the deviation and time dice will have numbers) like those shown below:

The game in play is a slower, more deliberative game that concentrates on the strategy of Football. This means that it is not only a more mental game that all ages can enjoy, like chess (as opposed to just those with fast-twitch muscles on a video game console), it is also an excellent tool for teaching newbies the fundamentals of football, the ins and outs of plays, positions and how they function, and why they’d name a position something as silly as Willy (A: he’s the Weak side LInebacker).

In addition, it will be a hobby game, like Warhammer Fantasy Battle or Flames of War, in that you will be able to paint your models to fit your team colors (real or made-up) and build a custom stadium for home games. Alternately, if you can’t paint a lick, there will be pre-packaged and painted Expansion Teams (including real NFL teams), with a set of cards and models for 50+ players, a whole team in a box, including the history of the franchise and special stadium rules for their home field. Other planned expansions include:

Dirty Tricks & Exceptional Plays: This card deck expansion would contain special plays and events that occur in football but cannot be accurately reflected using  miniatures rules, such as the events that lead to the Immaculate Reception: balls bouncing off shoulder pads, miracle catches made when surrounded by the opposition or attempting to goad other players to anger so they’ll start a fight and get thrown out of the game. 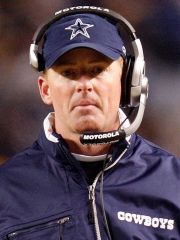 QBB Coaching Kit: This expansion adds a whole new level to the game as we introduce the Coaching Staff who affect the field game from the sidelines with coaching skills, the ability to call time-outs, challenge calls, and treat exhausted, demoralized and injured players.

The Coaching Kit also introduces the Playbook with associated Play Deck. With these you can plan out special plays that give your players an advantage on the field so long as they follow the play. A perfect way to learn the overall strategy behind the tactics seen on the field.

QBB Franchise Kit: Ever wanted to be Jerry Jones and build a Super Bowl winning franchise? This expansion shows the effects of the Stadium, fans, and money on a teams fortunes. Draft the best players to build your team, buy free agents to fill in the gaps and enhance the training facilities in your training camp to produce the absolute best gridiron warriors in the league. And don’t forget the endorsements, you need money to make all that happen…