As mentioned previously, I am both a middle school CTE teacher, and adjunct professor, so I’ve been pretty busy, lately, especially as I am also responsible for the school yearbook, which is finally done, hallelujah! So the game club has had another couple of sessions since my last post, and provided me with some interesting perspectives on what it must have been like for my first game master, a college guy named Warren, who worked at the Waco children’s home I lived in, way back in the day.

But before I get in to that, I’ll finish up on the house rules discussion started in part 1. 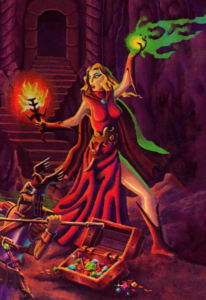 While INT and WIS bonuses do have a purpose, I’ve always found it odd that they didn’t have an impact on spell casting in B/X. So, while I stick to the rules for most things magical in the game, I allow Wizards a bonus spell and spell slot based on their intelligence bonus. A small boon, but one that makes being an intelligent wizard a bit more advantageous than extra languages and XP bonuses.

Clerics get the same, but only after they pick up their first spell at level 2. I like the idea of an Acolyte not having access to Miracles (what I call cleric spells) at first, especially as they have the combat skills and weaponry to make up for it.

I also use a ‘cantrip’ type rule based on something I once read on Philotomy’s OD&D Musings blog (which is, sadly, no longer online). Basically, while holding a stored spell, the Magic-User may manifest small ‘special effects’ related to it, by making an Intelligence test (see below). For example, if holding fire based spell, a MU might use some of that stored energy to light his pipe with his finger. A person holding a Charm spell could get a +1 to their rolls on personal interaction, and a person with a sleep spell could use a small smidgen of that energy to make a nearby orc guard drowsy and easier to surprise.

Finally, I allow Magic-Users to make scrolls at 1st Level. A simple little rules change that allows them to: a. get more bang for their buck out of their limited spell repertoire; b. make them spend those hard earned coins; and c. gives them a reason to use weird spells, like Ventriloquism, which they would normally ignore due to limited spell slots.

I’m not a big fan of tacking skills systems onto D&D. I like to keep my games fast and loose, without a lot of extra information to keep track of, especially for the players. In addition to that, I find that a lot of mechanical cruft tends to make the players think, well, mechanically. During the 3E and later editions, it drove me to nuts watching players spend more time staring at their character sheets looking for mechanical answers to problems, than trying to imagine the situations their characters were actually involved in and come up with solutions based on that.

It is much simpler, and flavorful, in my mind, to assume that most characters can use their basic attributes to accomplish most basic tasks. For specialized tasks I defer to the class system. A fighter, for example, would be the one to call on to analyze a tactical situation, while a wizard would be versed in legends and lore, and the cleric would be your go-to guy for ecumenical questions. Basically, if the player can justify it, I let them roll for it.

In addition, I allow the players to have a ‘background’ profession, that represents their life before taking up their adventuring career. Anything from blacksmith, to banker, to beggar, to simple farmer. But, to save time and present a sense of mystery, they don’t define that at character creation. They basically come up with it on the fly, as the game goes on, developing the character’s past as they go, and grow. So if they come upon an ancient forge in the depths of a cave, one of the players might say “this reminds me of my youth as a blacksmith’s apprentice.” At that point, they have justified the ability to make skill rolls for that background and better defined their character’s in the process.

Of course, this is all down to DM fiat, and I will quickly nix any attempt to combine backgrounds for every occasion in a random hodgepodge of ‘memories.’ You say you were a glass-blower’s apprentice? Don’t think so, you already said you were a blacksmith’s apprentice.

I do encourage memories to build on each other, however. For example, you say as a blacksmith’s apprentice you worked in a village near a dwarven enclave, so you could recognize basic dwarven runes? That fits, you can roll to see if you can read that runic inscription carved in the wall. You say you had a real problem with Ankeghs in your area when you were a farmer? Well, I’ll give you a roll to remember best how to fight them

As for how the skill rolls work? Simple. I’ve already mentioned how I like bell curves, and attributes are generated using 3D6, so that is what I use for skill rolls. Roll 3D6, add your attribute, and try to score 21+. Again, I an easily make this roll easier or harder, depending on the situation, by adding or subtracting dice from the roll, just like thief skills.

B/X covers weapon & shield, and two-handed weapons already, but what about two-weapon fighting? Again drawing from Philotomy’s well, I like to allow characters with a 13+ Dexterity to gain a +1 to hit when using a weapon in each hand.

Encumbrance is burdensome to most adults, much less middle schoolers, so I’m going with the Stones System. Smaller numbers. Nice medieval flavor. What’s not to like?

Yeah, it took two posts to lay out the changes, but these are minor and few in number, relatively speaking. There are folks who make a lot more extensive changes to the RAW, and with farther reaching consequences. The Attribute/Skill rolls aren’t even discussed in B/X, left as something that DM’s had to figure out on their own.

Next post will be about the kids and their games so far, with a little reflection on how things compare with my middle school games…