Designing the Game Engine, the mechanical base upon which all other aspects of the game are built upon, is the first task for any designer.

You can license or borrow an existing system to avoid a lot of basic work, take advantage of certain mechanical perks and/or to bank on an existing fan base for said engine. Many, many RPGs have been based off of the D20 system, famous for its progenitor, Dungeons & Dragons, for example, and UNITY is very popular for video game design due to the flexibility and customization it offers when creating both 3D and 2D games on a wide variety of platforms. And let’s not forget the bajillion variations on Chess, Risk and Monopoly out there. 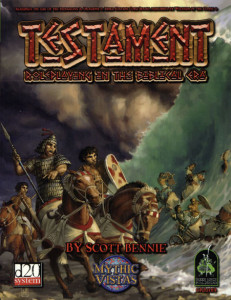 The downside to this often involves licensing fees and/or restrictions, and the fact that sometimes, what you want to do may not be wholly compatible with the engine you’ve chosen, requiring a lot of extra customization work to shoehorn your game into the existing system. D20, for example, is pretty good for D&D styles games, but many find the class and level system, Hit Points, etc. to be so at odds with the thematic or mechanical goals they are trying to achieve that, by the time they’ve modified the game to their liking, they may find that any benefits gained from it are pretty much negligible and the results are off-putting, to say the least (Moses as a 3rd-level paladin.7th-level Levite priest/10th-level prophet of the Lord, anyone?).

Starting from scratch, of course, is a lot more work, both in basic design and in making sure it works as it ought to. Let’s face it, D20 has nigh on 50 years of design behind it and, if you start with it as your base, you can pretty much fill in the blanks as far as the rest of your game goes. With your own game, however, you’ll be responsible for a lot more statistical analysis and play-testing to work out all the bugs and hedge cases that can grow out of even the simplest systems. This goes double for video games, where creating an engine from scratch takes a particular type of coding genius that is not as common as you might think. The end result of all that work is often worth it, however, as what you have is truly yours and is designed from the start to fit your game’s theme and aesthetics.

In my case, I am also saddled with an additional, self-imposed, restriction when it comes to Donjons & Dragoons: I can’t just base it off of D20 or some other system. I have to create something new, but that also draws on the existing game mechanics of the period (pre-1974) in order to end up with a project that gamers of the time would not only find somewhat recognizable, but acceptable as a game. Remember, the concept of or role-playing as a dedicated game was pretty much non-existent at the time (outside of Wesley, Arneson and the handful of people that owned Michael Korn’s Modern War in Miniature), so my theoretical author would have had limited resources of inspiration to draw upon. 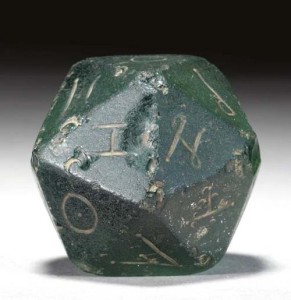 Polyhedral dice have been around for millennia, Totten had his Teetotum for Strategos, and there was much discussion in wargaming ‘zines over the 60’s on approximating percentages using everything from D6’s to D20s to randomly drawn chits. But, despite this, the vast majority of games before the advent of Dungeons & Dragons relied on the humble D6 for resolving issues of chance, and I plan to do the same for a number of reasons.

First and foremost, it is historically relevant. It has been the randomizer of choice for games throughout the centuries (especially among the lower classes), it inspired Pascal to develop probability theory, and it has been at the center of wargaming since the days of Von Reiswitz’s Kriegspiel.

Secondly, it is readily available (almost everyone has a few lying around the house) and the results of its probability curve are understood on an almost instinctive level by most people who play any kind of board game, i.e. when you say something has an ‘X’ in 6 chance, they can pretty easily gauge what that means. These things are still as true today as they were in 1974.

Finally, I must consider the perspective of our theoretical author, who I think would have been of a more practical, less business oriented, bent when considering polyhedrals vs. the standard D6. I think his educational goals and desire to make sure that every student could easily procure the materials for the game, would be very different from the economic forces driving Gygax, who saw the potential of polyhedral dice to provide a secondary revenue stream and limit the loss of profit from piracy of the written materials.

The only question is, out of all the different methods for using a standard D6 for resolution, which do I use? 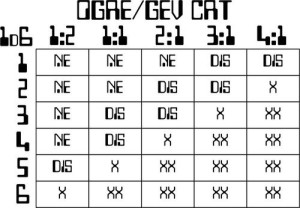 In OGRE, for example, one divides the attack value of a unit by the defense value of the target to get a ratio of odds (1:2, 1:1, 2:1, etc.). A D6 is then rolled, the number cross-referenced with the appropriate column, and then a result is obtained (No Effect, Disrupted, or Damaged/Destroyed). The procedure is simple (even if it requires some basic math), the probabilities are easy to read, and the results are pretty much spelled out.

It doesn’t have to be used simply for combat either: a CRT could be converted into a more universal table with results like No Effect, Partial Success, and Full Success. It could even be expanded for increased granularity, adding results like Full Success x2 or Critical Failure (and a there are many examples of games in the eighties, like Marvel Super Heroes and Gamma World 3E, that did just that).

Of course the major stumbling block for such a system is the fact that it relies on constant reference and lookup, but if you kept the table handy and compact enough that it might be kept confined to a single page or small game screen, that wouldn’t be a problem; especially for the wargamers of the period who were used to much more arcane information being presented within much more complicated (and often badly organized) layouts. However, CRTs are also a lot more predictable, and make decision points a lot more cut and dried and, well, mathematical (“if I move tank A in to support the attack, I only add x percent and that is not enough to shift the column from 1:1 to 2:1, so I won’t”). While this is great for making crucial (if rather unrealistically precise) decisions in a strategic wargame, it can be an anathema to role-playing, where such mechanical deliberations detract from the narrative. 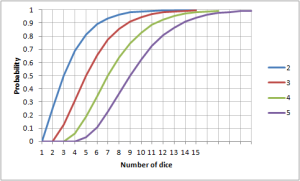 Another common wargaming mechanic, which would also be familiar to the players of the time, is what is commonly referred to as the Six-to-Hit method: grab a number of D6’s equal to the number of men/the combat factor/number of shots/whatever, and roll them. For every die that scores a certain target number (sometimes fixed, sometimes contextual) you gain 1 Success. In some games the defender will get to roll dice (representing armor factors, terrain, etc.) as well, cancelling out attacker successes for with theirs.

This system is fast, the size of the pool can be easily tailored to individual character abilities (Chainmail’s Superhero rolling 8 dice to the normal soldier’s 1, for example), difficulties can be easily set based on the minimum and maximum pool size, and situational modifiers can be easily reflected by adding or subtracting dice from the pool based on referee whim. The results can be harder to predict and describe, and it can also feel very swingy and out of your control, unlike CRTs, where player manipulation of the odds is an important component.

THE BEST OF BOTH WORLDS

I like Six-To-Hit for the flexibility it provides, but I also like CRTs for the very clear results they provide, which makes it easy for the referee to determine target difficulties and results, and also allows me to tailor the results beyond the simple success system without a lot of discussion about how 1 success is different from 2, 3 or 6. Aesthetically, tables are very much the fashion during this period in gaming history, so I am thinking that a mix of the two is in order, and would fit well with the mind-set of the time.

In effect, we’re replacing the combat matrix of original D&D (OD&D) with a shortened Universal Results Table, and then using dice pool mechanics to provide the results for the left hand column, rather than the roll of a single D20, which I have never been a huge fan of (it’s too linear and I hate rolling single dice). To keep this sensible, I am going to restrict the size of the dice pool, and as a result, the maximum number of successes, to six. This gives me a six by six table with a range of 36 possible results, spread among the following categories: Blunder, Failure, Partial Success, Success, Smashing Success, and Cracking Success.

With this table, I can tweak the results of the successes beyond the binary succeed/fail of the OD&D matrix and provide simple easy to remember results for different types of actions, like combat, trade, social situations, etc. As an example, let’s take a look at combat (likely to be a very common activity in our game) as seen through the lens of the CRT:

A player who scores a Success result in Melee scores a single hit, which would kill a standard soldier or ‘hurt’ an enemy hero. If he rolled 3 successes and scored a Cracking Success, he might kill 2 ordinary soldiers, kill two and wound an enemy hero once or some other combination. But if he rolls to far under the umber of successes needed, he’ll score a Partial Success, so that he scores a hit, but loses an action in the process (perhaps he overextends himself and is forced to recover).

Of course the results would be different for other activities, and the referee would be encouraged to use the General Table and his own judgement for non-specified cases.

Now, it is very true that I could come up with an even simpler, more narrative version of this system, but considering the decade of game design I am trying to emulate, this seems to me to be the more likely outcome of a first professional foray into RPGs. I think that our author. being present at the first Braunstien games and observing the difficulties that arose from full-fledged free form play, would have erred on the side of more, not less structure.

Maybe later on in our alternative history, when Avancée Donjons & Dragoons is revised into a second edition, the author (who will hopefully not have had the same falling out with his own company as Gygax had) will simplify this mechanic so that charts are no longer needed. But for 1974, and the author’s wargaming and educational roots, I think we’re hitting pretty close to the correct mixture of mechanics, if not hewing a bit more narrative than might have been likely in the circumstances.

All of this is, of course, only the roughest cloth at this point. I still don’t know what the base target number will be (4 or 5, I need to run the numbers a bit more), the basic CRT and individual results tables will undoubtedly go through more than a few permutations, and there will be additional wrinkles added to the system to bring it to life (such as a method for the players to reroll dice to improve their odds and a system of ‘Misfortunes’ to increase the dramatic potential of every roll), but at least we have a basic skeleton to hang a game on…