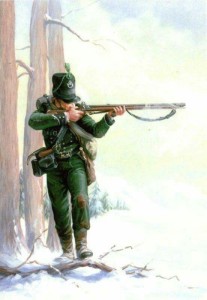 Shortly after writing a post on design decisions for the basic rules engine of the game, it occurred to me that I was putting the cart before the horse. Instead of imagining what a game based of a wargame would look like, I really needed to design a wargame and then let the core rules for the RPG evolve from that naturally. So I spent some time doing that and ended up with a simple set of rules that will most likely serve as the mass combat system in book 2 of the set: Captains & Campaigns.

Using the conflict resolution from that game as a base, I added a simple ‘drama generator,’ in the form of Misfortunes, and now have a set of core rules that I believe could have realistically come from the mind of a literature professor whose hobby is miniature wargaming. The results are below.

Basic Task Resolution in Donjons & Dragoons is accomplished by the player rolling a number of Dice equal to whatever Attribute the Judge thinks is appropriate to the action being taken. Firing a musket, for example, is clearly based on Dexterity, but repairing it would likely require Saavy, and using it in melee might rely on either Dexterity (if using a bayonet) or Thews (if bashing an enemy’s skull in with the buttstock). The final decision is the Judge’s to make.

Before the roll, the Judge will set a Challenge Level, based upon the difficulty of the task at hand. The player then rolls the appropriate number of dice: each ‘5’ or ‘6’ is a Success; each ‘2’, ‘3’ or ‘4’ is discarded, and each ‘1’ is a Misfortune. The number of Successes is then cross-referenced with the Challenge Level on the Task Resolution Table to get a result. 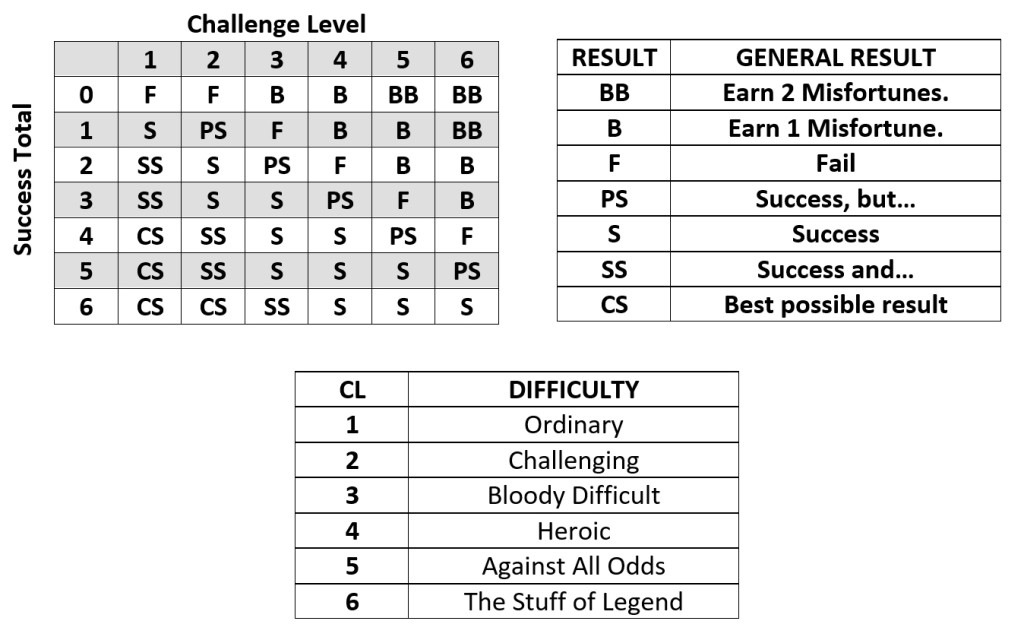 The Judge may decide to give the roll Advantage due to some situational benefit in the character’s favor. A Rifle, for example gives Advantage during shooting tasks, good roads give Advantage to characters marching along them, and having an NPC owe the character a favor will give Advantage when trying to get them to do you a favor in return. 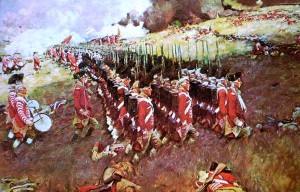 The Judge might, instead, decide to give the roll Disadvantage in circumstances where external factors work against the action. Travelling in bad weather would give a character Disadvantage when marching, getting a favor out of a character that despises you gives Disadvantage, and Charging an enemy on a hill gives your attacks Disadvantage (and could also, reflexively, give the enemy Advantage). 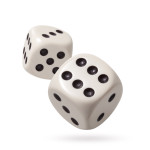 Certain character abilities, like Trades, will allow rerolls. Each reroll may be used to reroll a single die, once. No die may be re-rolled more than once, and the player must accept the result of the second roll, even if it is worse than the original.

When another character passively resists, or actively opposes, an action, they may (at the discretion of the Judge) roll dice to counter the successes of the character taking the action. 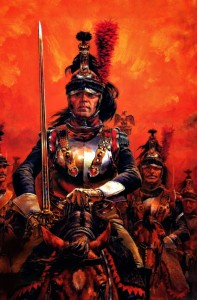 In some cases (such as ducking behind a wall to avoid being shot) the Judge might apply both Passive and Active Resistance, but no Resistance Dice Pool may ever go higher than 6.

For every Success on a Resistance Roll, the acting character’s successes are reduced by 1. An Action cannot be reduced to less than an F result by Passive Resistance. Blunders can only be forced by Active Resistance.

When a ‘1’ is rolled on a die, regardless of 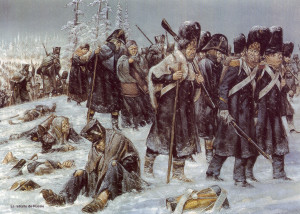 whether the test is a failure or success, some misfortune falls upon the head of the acting character. The Judge will choose from one of the following unfortunate events (or may make up an original one on the spot, if they desire), for each Misfortune rolled. In some cases, multiple Misfortunes may be used to make a specific event even worse.

Reduce Success: -1 Success on the roll.

Counter Action: An opponent gains an immediate action (one roll). An individual opponent may only gain one Counter Action per unit of time.

Delay: The completion of the action is delayed one unit of time for each Misfortune spent. A musket takes longer to load, a lock takes longer to pick, the character slips on rubble while trying to ascend a breach, their bayonet gets lodged in their enemy, requiring an extra unit of time to retrieve it, etc.

Broken Item: A piece of applicable equipment is broken if Misfortunes equal to its Durability are used on this event.

Endanger Others: Some other character is placed in eminent danger due to the character’s actions. Useful as a means for the Judge to put the PC in the horns of a dilemma.

Looming Peril: Save a Misfortune to use later. Such saved Misfortune may be used at any time, not just during a character action. By saving up, more dramatic misfortunes can be engineered and dramatic turnarounds can be saved for more appropriate moments.

So that is the entirety of the core rules, except for specific advice on how to apply them in certain situations, like combat, negotiation, making things, traveling, etc.

It is definitely (at this point) lighter and less mechanical in it’s design, something I think Maxwell Luther would shoot for, being a lit professor and wanting to hew as closely to Braunstein as possible (but with a bit more mechanical structure and advice for the referee).

I’m currently hammering out the character generation, and that should be the subject of my next post. So far, it’s simple, and random, with lots of luverly tables. In other words, very 1970’s…

THE ROCK ON WHICH THE METALSPHERE IS FOUNDED

Life in the Metalsphere is, paradoxically, both extremely anarchic and extremely ordered. Whereas the very ethos of Rock & Roll demand that the listener fight conformity and champion the individual, human nature being what it is, those same champions inevitably impose ideological standards all their own and a new order eventually asserts itself.

Nowhere is this more evident than in the strictly controlled, neo-feudalistic dark age culture of the 31st century, where might makes right and a person’s Metalocity rigidly determines their station in life. After the chaos and destruction of the Thousand Psychic Wars, humanity craved order. Those who were strongest after the war, the Lords of Rock, were the ones to establish that order and they imposed their ideas and beliefs on it, ideas and beliefs based on the music that had literally shaped the universe around them.

There were eight Lords of Rock, each one dedicated to a specific musical style that had a particular effect on sub-quantum superstrings and helped them to take command of large armies and even larger sections of space during the war. To end the destruction they agreed to divide known space among themselves. They each established a School of Rock, and wrote a Book of Rock, which serves as the source of cultural mores, military doctrine and iron-handed law in their domains to this very day.

While individuals are theoretically free to wander where they will and do what they please, the reality is that all of their behavior is predicated upon a firm foundation of beliefs and mores related to the School of Rock in which they were raised. It influences all their interactions as surely as the moon effects the tides, and the degree to which a headbanger adheres to the principles and edicts of their school will ultimately determine their place in society.

Those who are the paragons of their School will eventually become Metalheads (31st century feudal knights) or even Warlords. The most insanely devoted might even become Inquisitors, hunting down the impure and cutting them from society like a cancer. Those who are found wanting will find themselves becoming thralls or, even worse, ‘Scavvies’: scavengers who have no rights and are scorned and abused throughout the Metalsphere. All throughout human space, Issuing the statement ‘I am more Metal than you!’ has serious implications and proving that, or having it proved against you, has severe consequences for your station and status in life, no matter how ironically that conflicts with the central conceit that Rock & Roll is all about rebellion and freedom. 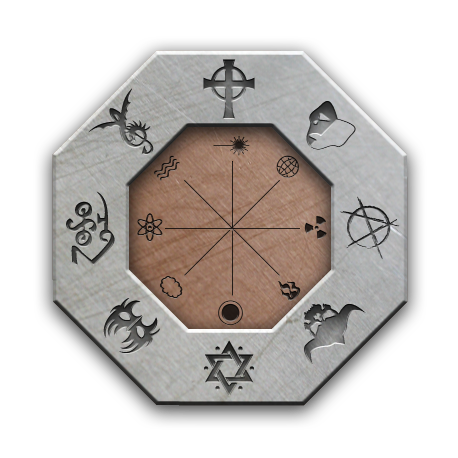 When shown together, the Eight Great Schools are represented by holy icons arranged around a stone or metal octagon, and it is very common to see this symbol in talismanic form around some headbanger’s neck, adorning the hull of a Warp Craft or tattooed on the skin of a thrall. While all respect the  integrity of that mighty symbol as a whole, most keep the icon of their school aligned at the top when wearing or branding it.

When the borders of the Metalsphere were initially established, there was a great deal of interstellar territory traded to ensure that two styles who were vehemently opposed to each other were placed on opposite ends of space so they wouldn’t be warring neighbors in the new order. Thus the Rocktagon not only shows the various schools, but also their placement in space and their natural oppositions. As it worked out, the numbering of the schools and their representative elements all seem to naturally echo their mystical and elemental nature as well, which tends to reinforce the holy validity of the structure in the minds of the citizens.

Each school has a mystical number in addition to their holy icon, and this is based on their position on the Rocktagon as well, starting with the Nazarites at space number 1 and moving around in a clockwise manner to end with the Yngwie at number 8. The number of an opposing

school is always considered a ‘discordant’ or unholy number and headbangers, being a relatively superstitious lot in general, will typically avoid imagery, activities of even repetitions associated with it, even when this leads to absurd consequences.

Each school is also associated with a mystical element or concept, whichusually shows up in the harmonic resonance of their musical style. Again, based on the positions of the various styles on the Rocktagon these naturally oppose each other, reaffirming the unshakable truth of the Rocktagon as the driving force behind all of existence.

Finally, every school has a Patron Saint, typically a legendary figure of Rock from the before time.Their original names have been lost to the mists of time, and they are often portrayed in mythical, sometimes fantastical forms, but each was at one time the paragon of the musical style represented by the school founded in their image and many headbangers believe they watch over and guide those whose are worthy.