That’s a mouthful, but describes the book pretty accurately. 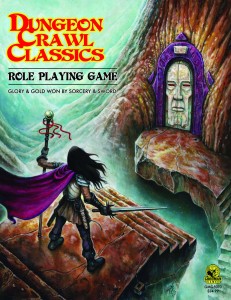 First of all it is a supplement. Licensing rules for Goodman Games prevent me from including the core DCC rules in the book, so you’ll need the main DCC corebook to use it as intended. This is fine by me, as we really don’t need yet another retro-clone variation cluttering up a marketplace filled to the brim with minor variations on old school D&D. In fact, as DCC uses the D20 license and hews closely to OSR rules paradigm (without actually being a pure retro-clone, which is why I like it so much), you will find a lot of rules material in here that will easily translate to your favorite OSR game and the rest should only require minimal conversion.

Second of all, it will be a Toolbox for generating your own setting. A lot of the book will help you to decide what assumptions you want to make about technology, aliens even player classes, to make your ideal campaign setting with advice and even random tables for moments of indecision. Folks who have read my previous book Barbarians of the Aftermath will understand the kind of toolbox that I’m talking about.

That being said, Void Hunters will have a much tighter focus than BotA, which was a great deal more expansive in theme, covering every sort of post-apocalyptic scenario possible. Void Hunters will focus is on a very specific subset of Seventies Science Fiction (which I will talk more about in a minute) that revolves around my personal Appendix N, and does not include Star Wars type Science Fantasy or Pulp Science Fiction (cause Lord knows we have enough variations on those).

That being said, it is a supplement for Dungeon Crawl Classics, the premier 1970’s Style Fantasy RPG, so that means the rules will be totally compatible with anything you’d like to pull out of that book. You want Vancian wizards making Faustian bargains with elder gods who must not be named while flying about in spaceships with android companions and barbarian tribesman from the planet Mars? Well, if you have both Void Hunters and DCC (and an inclination for kitchen sink innovation) it will be as easy as picking something from column A and another thing from column B and throwing in a little bit of Column C for good measure.

A question I’ve been asked recently is ‘What do you mean by Seventies Science Fiction Gaming?’ Basically, the style I’m talking about includes the following elements: 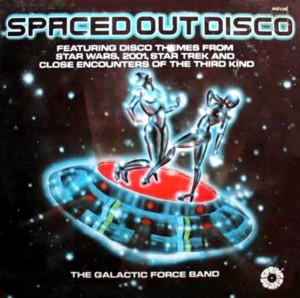 One of the defining elements of the seventies is a darker, pessimistic (and some would say self-centered) view of the world that that was very much the ‘come down’ from the high of the sixties. Our psyches were darkened by the Vietnam War, the Watergate Scandal, the Oil Crisis, global cooling (yes, that was a thing), growing pollution and overpopulation worries, the threat of nuclear annihilation and Disco (hey, once you’ve heard every damned thing, from the Star Wars theme to Donald Duck turned into Disco, you’ll feel the same). This, combined with the rapid advance in technology and a growing realization that the universe was a lot more destructive and weirder than we’d ever imagined, gave a more serious, humanist tone to the fiction of the era.

As a result, much of the science fiction of this era, in books, movies and magazines, focused on the frightening advance of technology, the terrifying (but often breathtaking) unknowns of space, and the very well understood and depressing tendency for man to screw over his fellow man, even when faced with the total extinction of humanity.

There was a heavy emphasis on realism as well: the technology tending to hew more towards what might be possible in the next century rather than light swords and laser crossbows. In the same way, the search for extra-terrestrial life turned into an exploration of long dead or devolved civilizations and fighting off super-predators waiting to prey on the unwary. Science fiction became, in many ways, Dystopian, a violent rejection of the Utopian visions of the previous decades. 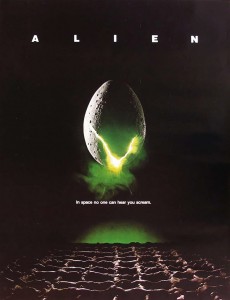 Space in these stories is dangerous and uncaring. The unprepared will surely meet a gruesome end and, when so much is unknown, it is practically impossible to be fully prepared. Especially against the mad pressure of extended isolation in an infinite void, the dangers of previously unknown stellar phenomena and the predations of undreamed of alien life and your fellow man.

That is the very essence of space in Void Hunters and will probably be re-worked for the back cover blurb. The tiny caption on the movie poster to the left, from the quintessential dark science fiction movie of the decade, pretty much sums it up… 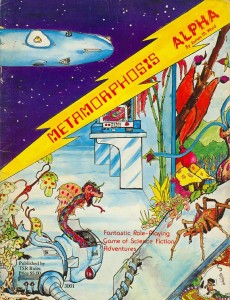 Metamorphosis Alpha was basically a game of D&D in space. Take the concept of the mega-dungeon (in which the players explore an expansive environment from top to bottom over a long period of time, slowly growing in power until they conquer it fully) and overlay science fiction elements on top of it. The players were the primitive, devolved descendents of humanity sent into space on a great space ark many centuries previous, exploring it and all the new creatures and peoples that have evolved since then, slowly recovering the technology and knowledge they need to take control of the ship and find a new home world. Very much in the vein of the early 70’s television show The Starlost. 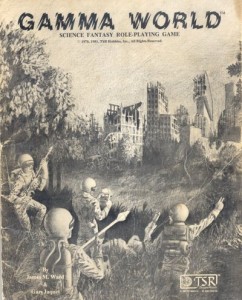 Gamma World was much bleaker and examined the dog eat dog world of survival after the near extinction of humanity in a nuclear apocalypse.It is the spiritual ancestor to Barbarians of the Aftermath in many ways. And while the post-apocalyptic genre really only took off in the eighties (when we were all certain we were going to die in a ball of nuclear flame or end up envying those who did) it got its gaming start in the seventies, and it seriously seriously struck a chord because, quite frankly, many of us didn’t think we’d make it to the eighties. The survival at any cost meme along with the man screwing over man theme was given cathartic life in Gamma World and influenced a generation of gamers.

Traveller was THE hard sci-fi game of the period, really pushing the realistic technology and humanist angles of seventies science fiction. Communication and travel were slow, so interstellar empires were non-existent or feudal in nature and player characters in the game 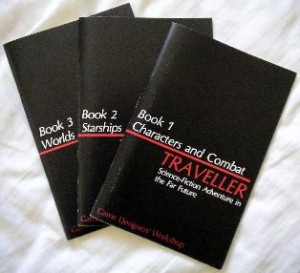 were experienced soldiers, explorers and traders in a universe that revolved around exploitation of interstellar resources. Characters were the epitome of humanity in seventies sci-fi, opportunists who  did not measure success by experience (the inexperienced and unlucky didn’t survive to become player characters, which was emphasized by the fact that your character could actually die during character generation) but by what they took from the universe for themselves.

Of these, I’m going to take the dungeon exploration aspects of Metamophosis Alpha and mix it with the stark realism of Traveller and the survival theme of Gamma World. to create the ultimate modern take on Seventies style science fiction style gaming.

Void Hunters will bake all of these influences into the rules to create something that is a bit more than ‘DCC In Spaaaace!’ but retains that DCC feel of gritty adventuring in a dangerous setting. It will also be an exploration game set in a dark and uncaring universe where explorers, traders and military expeditions dive into the unknown and find new resources to exploit, the remains of ancient, long-dead alien civilizations to explore and unthinkable horrors to survive.

In my next post, I’ll talk about some of the new mechanics that will subtly change DCC into a science fiction game…