All characters in Void Hunters start out as Redshirts. A Redshirt is a level-0 character with a lowly occupation, and they go through the same Character Funnel winnowing process as DCC characters. After this, Void Hunters assumes that they receive some sort of promotion and spend some years training for, and gaining experience in, a new career: their Class.

Void Hunters will introduce 6 new classes for science fiction gaming using the DCC rules set. Classes not only determine the basic DCC sort of things, like Action Dice, critical tables and special abilities, they also determine the type of technology the character is familiar with, their starting equipment and the particular type of mental instabilities they are prone to while out in the void. 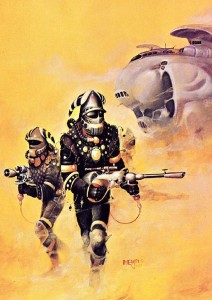 The Soldier is the DCC Warrior in many ways, with the best, all around fighting ability of any class (including Mighty Deeds of Arms) and the highest Hit Die. The resemblance ends there, however, as Soldiers are not just talented fighters or fierce barbarians, but highly trained combatants, most with a military background of one sort of another, be it regimented army sergeant or gun-for hire mercenary.

They are, of course, trained in Weapons and Armor, but they also possess the MOS special ability, which allows them to pick up some very specific training as they rise in level, A Soldier does not start with Transport as a Technology Base, so they will never. for instance, be the all around driver, pilot and mechanic that someone with Transport is, but they might have an MOS in Tanks, giving them a d20 Action die in the repair and operation of those types of vehicles. They can even pick up very specific bits of Experimental technology with enough experience, like learning how to use and maintain a particular alien weapon. At higher levels, they can even pick up a special ability from another human class (i.e. not Synthetic) for a soldier who is incredibly stealthy or one who develops a single psychic power, for example. 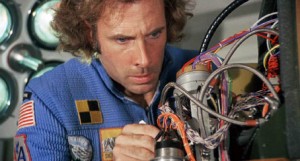 This covers all sorts of brainy folk with a very wide range of scientific and technical skills. They will have the widest Technology Base of all the classes and are the only class that get the Experimental Tech Base, which gives them the ability to decipher and deconstruct, bypass or utilize alien tech and then try and pass on that understanding to other classes. They will only start with a number of these, however, which will determine their specialty (starship engineer, research scientist, transport officer, etc.), but they will have the opportunity to learn more of them as they advance in level, until they become versatile in pretty much everything but fighting.

They are, pound for pound, the worst fighters of all the classes, having spent so much time amassing scientific, technical and esoteric knowledge that they have had little time for combat training, but they make up for it with their Gadgeteering special ability, which allows them to improvise devices using whatever is handy and lying around.

Jack Holloway from H. Beam Piper’s ‘Little Fuzzy’ is the inspiration for this class.

The Point Man for exploration teams, the Scout is a survival specialist who is also good at identifying potential dangers before they can do harm. Scouts are the second best fighters and also possess a wide Technology Base that allows them to function on their own for long periods of time. Their special abilities include an increasing bonus to AC (a sixth sense that helps them to avoid danger) and improved Stealth skills.

When it comes to dealing with sentient aliens who are not automatically hostile, the Scout also functions as a First Contact specialist, giving them a bonus on the Reaction Table when to trying to communicate with and befriend them. 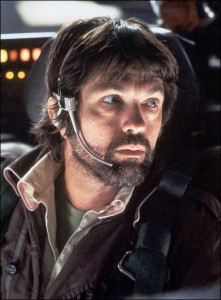 The Officer is the team leader. In D&D 4E terms, you’re looking at a Warlord sort of character, whose abilities help to bolster his team, especially if he leads from the front.

Officers in Void Hunters also serve as the team psychologist, as the ability to lead a team in deep space is only as good as one’s ability to understand their innermost fears and desires, anticipate their behavior and head off any potential issues that might lead to…SPACE MADNESS! As such, some of their special abilities will revolve around ministering to the mental health of their team and helping to cure short term psychosis before it can fester into long term insanity. They are, mentally, the toughest members of the team with the highest Will Save for that reason. 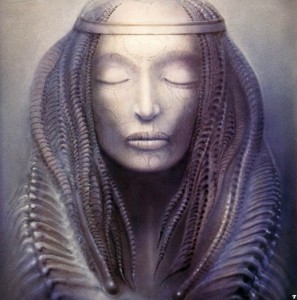 This is an optional career, and the GM may forbid them on the grounds of realism, especially if he is running a campaign in a hard science fiction setting. They are, in effect, the Wizards of the Void Hunter game, but with very different power levels and restrictions.

Psychic powers are going to work in much the same way as DCC Magic in that there will be a ‘Psychic Roll’ based on Personality, and the result will be looked up on a table. There will also be corruption in the form of ‘Psychosis,’ various temporary and long-term mental disorders that the Psychic can pick up and may eventually drive them totally insane (and there are some things in the darker corners of the universe that will speed up that process).

The tables remain, but they will have a much different slant. Hard Sci-Fi Psychics are a recent evolution of the species, their powers barely understood by science. This means, mechanically speaking, that the curve of effect on the tables will be much steeper (and the tables much shorter as a result). The low end of the table will be rife with poltergeist effects and misdirected mental energies, with only the lowest results costing the Psychic the use of their powers for a time or knocking them out from the strain. On the other hand, unlike Wizard Tables, the higher end of the Psychic tables, the ones where a Psychic shows truly massive power, offer a chance for corruption/Psychosis just as the low ends do. At level 5, a psychic might truly start to frighten their team-mates, whom the Psychic no longer relates to in the same way, and a level 10 Psychic risks turning into an insane being of god-like power with every use of their powers!

Psionic abilities will also be grouped into Disciplines, and Psychics will be defined by a single discipline until they gain higher levels (3, 5, 7, 9), at which point they might branch out. This means that they will be much more focused than wizards and their role in the game will vary from character to character. One can imagine a Telepath being part of First Contact team (or used as an interrogator in a War Amongst the Stars setting, ala Starship Troopers); a Telekinetic acting as the ‘thief’ in a Hulk Recovery Mission, using their powers to unlock doors or grab potentially dangerous artifacts from afar; while a Pyrokinetic would serve as ranged fire support for a Military Special Ops unit.

So psychics are more limited than wizards in some ways, but they don’t have to make deals with supernatural patrons, find arcane manuscripts to gain new ‘spells,’ and may eventually recover from their ‘corruption’ over time with the right psychiatric care. Like Wizards, however, their ticks and psychosis will slowly make them peculiar in a way that will make it harder for them to deal with the ‘normals’ that surround them. One day, they find themselves totally unable to relate to what are, essentially, dumb apes in comparison to them, from an evolutionary point of view, and may even find themselves at war with their previous team-mates and friends who are terrified of the Psychic’s power.

This of course, assumes that they live long enough. There are things in the void that hunger for the minds of the ‘gifted’…

I deliberately used David 8 from 2012’s Prometheus as my illustration because while Ash, from that movie’s seventies predecessor Alien, is actually the same type of Android from the same setting as David, I think Michael Fassbender captured that ‘not quite human’ aspect so much better, and that is the image I want people to have of a Synthetic.

Game-wise, the synthetic class is the ‘demi-human’ class of Void Hunters. Better than humans in oh so many ways, but with a built in rarity that comes from a very limited place on the 0-level occupation table and a specific set of weaknesses or vulnerabilities that hinders them in unique ways as well. Being programmed to obey specific humans, for instance, and not being able to ‘heal,’ relying on others to repair them in many cases. I’m still noodling on this class, because I don’t want it to become an Uberclass, but I don’t want to betray their literary underpinnings by artificially weakening them, either. A few ideas I’ve had on how to approach them include:

1. Treat them as an Elf, basically giving them the abilities of two classes (Soldier and Sci-Tech seem the most likely) and slow down their XP gain in some manner to represent their lack of insight (the Basic D&D variation) or give them some serious vulnerabilities like the Elf’s aversion to iron (the DCC variation), or some combination of both.

2. Give them bonuses in STR, AGL and INT, but really nerf Personality and give them an automatic Luck of 0.

3. Some combination of the previous 2.

Those are my first rough concepts for the character classes for the game and, as you can see by the change of scientist into sci-tech, they are still evolving as Void Hunters simmers in the back of my brain. Some, like the Soldier and Sci-Tech, are very simple to design and will go quickly, while others, like the Psychic and Synthetic, will need careful crafting to make sure they are fun for everyone.

Note that I didn’t say, ‘balanced’ for everyone. I like classes to be powerful in their own, unique manner, even in situations outside of their sphere of influence where clever players, none the less, come up with unusual ways to utilize their abilities to overcome the challenges before them. Balance is a holy grail I do not pursue. Fun is my grail, and as long as everyone can play a different class and feel they got an equal amount of that, I’m a happy game designer…