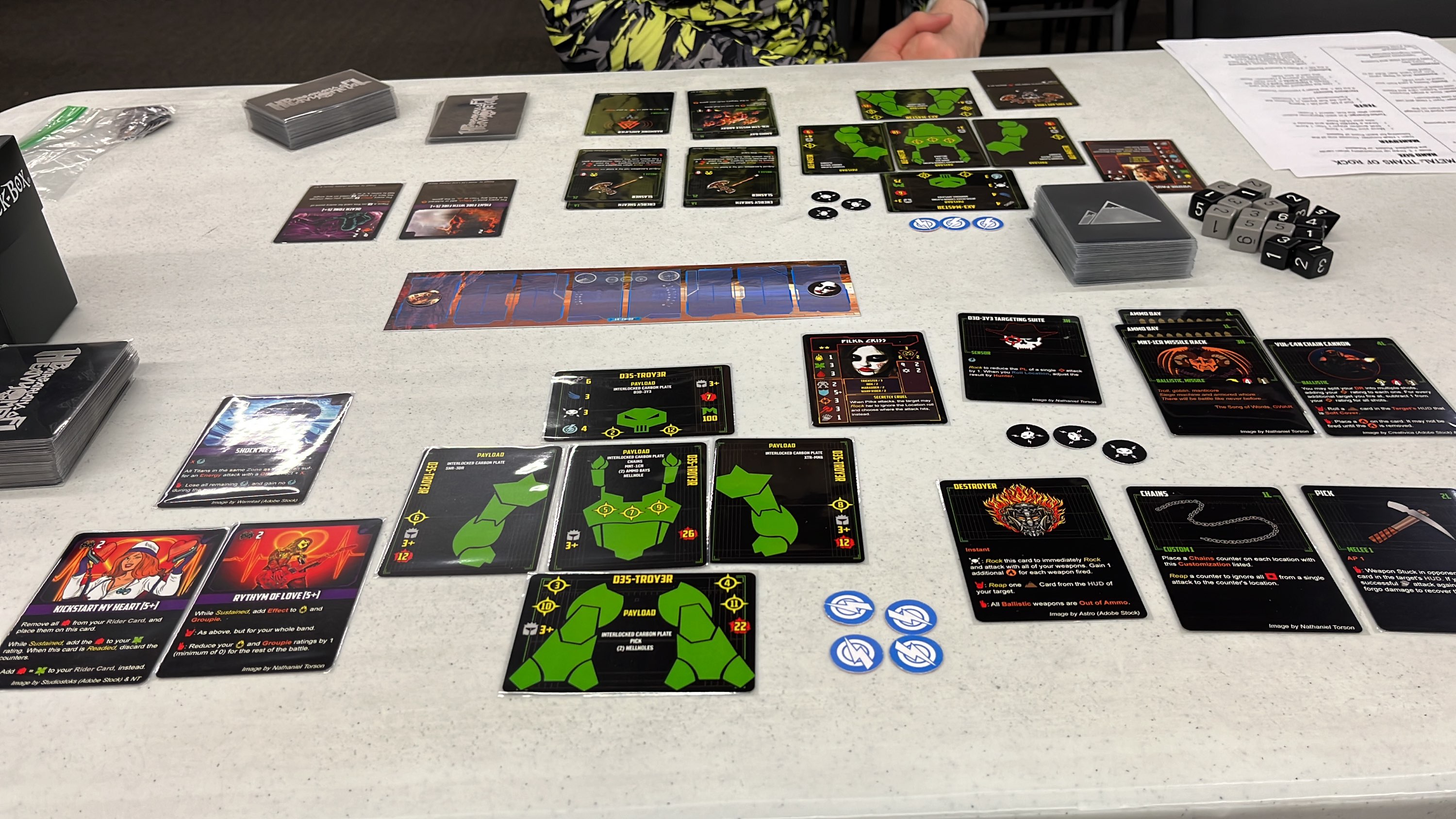 V4 in action: Pilka Criss in her Destroyer, vs. Vinnie Paul Van Dahl in his Axemaster…

Last Saturday I held a public playtest of version 4.0 of the rules.  This playtest was significant in that it was the first with all eight schools of rock represented by individual decks, and all 32 starting Titans. The complexity of interactions between the many, many cards in the set, at this point, meant that any errors in the core mechanics should be brought into sharp relief during play. And boy-howdy, did they ever!

The player pool turned out to be small, with only two players and myself, but I still gained a lot of valuable information on the current state of the game, and how much work needs to be done to make it ready for sale. 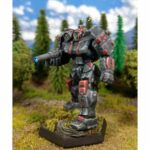 The first and most important change was in my perception of how the mix of conceptual elements (miniature wargaming and card gaming) balanced and affected the mechanical play of the game. On the one hand, you have the detailed mechanics of games like Battletech or WH40k, which means a lot of tactical variety, but also lots of table space and long play times (upwards of 3 hours, depending on point values).

On the other hand, you have the simplicity and portability of card games, which in general, don’t require nearly as material or table space, and rarely last no more than an hour, but have less tactical and strategic agency. My goal with BoHM has always been to create a hybrid that takes the best of both formats and ties it to a strong theme.

After two games, it became abundantly clear that this game, in its current version, leans much more heavily in the direction of wargaming, rather than card gaming, in complexity and playing-time (nearly two and a half hours for the second game, which is way out of line for a card game). Table-space skews slightly in wargaming’s favor, as well. With all the cards laid out, it takes up an area roughly 3’x 2′ per player, roughly half that of the standard miniature game, but double that of the standard card game. This imbalance clearly needed to be redressed. But how?

Feedback from the players identified three main mechanical issues, in this regard:

The shifting balance between armor and damage has been an issue since the first version of the game. Titans died too easily in versions 1 and 2, and then I overcorrected between versions 3 and 4, so that the playtest games took far too long to resolve. Even after the changes made on the fly after the first game in Saturday’s playtest, the second took almost 3 hours to finish.

It was at this point that I realized why I was having this issue: my wargaming roots were showing, and overly influencing my mechanical design. 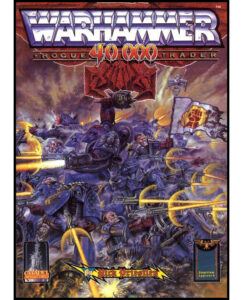 I’ve always been very vocal about how this game is supposed to be an homage to all the things I loved in my ’80s youth. The problem with this is that collectible card games were a post eighties invention, and not as ingrained in my gaming DNA as tabletop wargames. At one point I owned about 85% of Games Workshop’s catalog (and pretty much kickstarted the GW hobby in my neck of the woods), while I sold all my Magic cards a mere two years after it came out and only dabbled with other card games. It wasn’t until games with in-play deck-building mechanics popped up over the last decade (games like Star Realms), that my interest in the possibilities of card-based games was truly piqued.

Having realized this, I went after the wargaming shibboleths that haunted my current version of the game. The first thing to go was the armor roll, a core element of the game since version 1, and based on the traditional armor save used in most tabletop wargames (especially WH40K). I love the mechanic, because its quick and easy to understand, but it doesn’t combine well with the ablative armor system used in games like Battletech (which I also loved).

In effect, I was doubling down on armor, and it was taking forever and a day to actually cause any damage. I needed to use one, or the other, not both (duh). Ablative allows you to have extended combats between single units, and creates tension without the swinginess of dice pools, so out went the armor roll. I kept cover rolls for terrain, but for the most part… 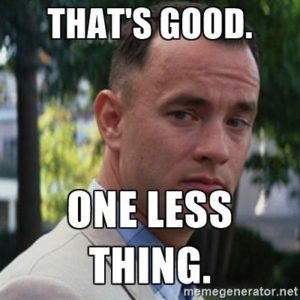 Speaking of doubling down on armor, the last version boosted external and internal structure totals considerably. This issue was less easy to fix, and it forced me to go back and change some of the underlying formulae and numbers that formed the core of Titan design.

The main issue was the linearity of structural progression between different sizes of Titan. Reduce the numbers for the larger models, and the lighter ones become glass cannons. But increase them, and destroying a Juggernaut becomes a matter of death by a thousand cuts. So, a new formula was introduced that reduced the discrepancies in structural integrity between various Titan classes (providing more of a negative curve) and relied more on other factors to highlight the differences in power level (like weapon capacity, strength, speed, and literal power levels).

This, of course, meant changing an entire set of interrelated cells in a massive multi-page spreadsheet (and rebuilding several Titans in the process), but even if the balance isn’t perfect this time, it will be much easier to modify using a single set of numbers in future, so it was totally worth it. 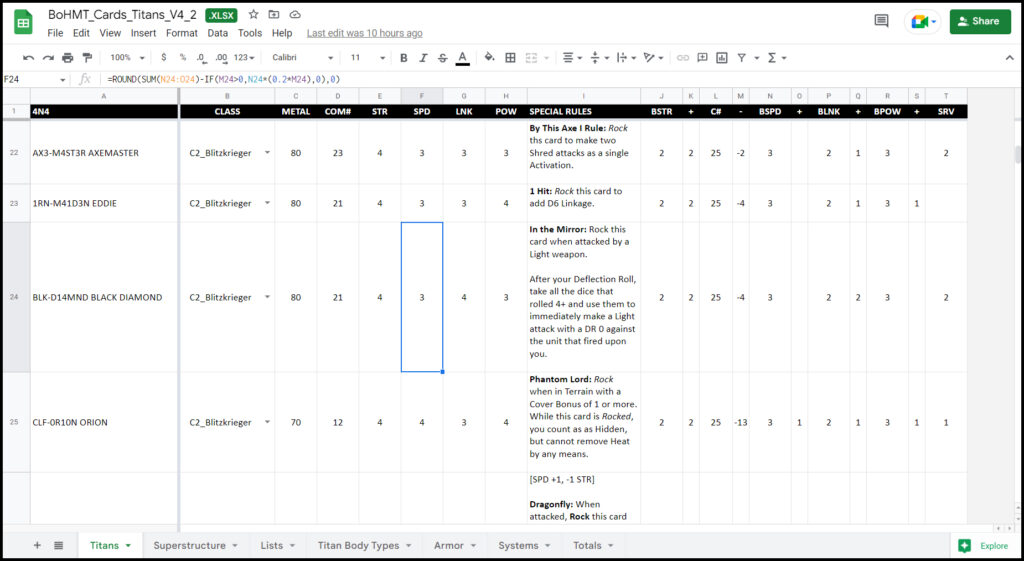 A whole lot of functions goin’ on…

All of this naturally inspired a partial solution to problem 2, as Cover now has become much more valuable as the only real way to mitigate damage (along with other special effects, like the cooling ability of water, or the ability to block LOS using a hill or cliff). Two birds with one autocannon round, so to speak.

Solving the differentiation between attack modes was the easiest of the three issues to solve, and also contributed to making the game less static (issue two, again). In the first playtest, once in close range, nobody budged, and it became a slug-fest of ‘I shoot you,’ followed by ‘fine, I chop at you.’ The Tactical Display became an afterthought, the differences between ranged and melee Titans became irrelevant, and the game was reduced to simply chucking dice at one another. This was the one area in which I had a total wargame fail. 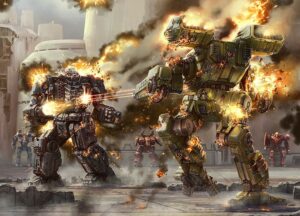 My redesign should hopefully create more nuanced version of combat. Only certain weapons are now allowed in Melee and Hand-to-Hand combat (range 1 and melee weapons for Melee, none at all for Rumble), engaging and disengaging requires the use of precious actions (improving the action economy as a side result), and going full Rumble is (as in real life) such a desperate affair that it encourages Titans focused on ranged combat to keep their distance (which means I’ll also be expanding the number of Zones on the Tactical Display to allow more room for maneuver).

BUT IS IT METAL…?

Hopefully, all of this will redress the balance between the wargaming and card playing aspects of the game, by reducing play-time while also boosting tactical options and considerations. But only time, and future play-tests, will tell. 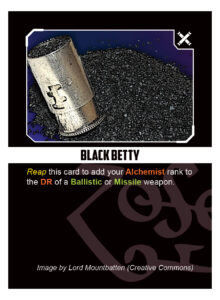 It wasn’t all redrafts and rebuilds, however. The general consensus on the difficulty of learning and applying the game rules seems to be that, once the basic rules of the game have been applied for a couple of rounds, the game is rather simple to learn and play. There is a great deal to learn, strategically, due to the variability of the cards used in the Tactical Action Deck, but no more so than any other deck-building game, and, after only a half hour of play, one player was really starting to get the hang of how to apply his deck, and which Titan and Rider would be best suited for it.

The game theme was also fairly well received, and the feeling of giant rock & roll robot combat seemed to come through well in play. One player actually sang the title of one of the cards every time he played it (in this case, ‘Black Betty’ by Ram Jam).

Sonic Wizardry was also repeatedly employed, and reinforced the musical fantasy element the game needs to really reinforce its theme. Those damned Dogs of Doom (nightmare spectral hounds of titanic proportions), for example, worried my legs constantly throughout the game, and my own music kept costing him actions due to the distraction of spectral images called up by my playing Fear of Ghosts.

The Riders also have enough variation to give them all a unique role in combat, depending on which Titan and Deck you combine them with. There is a lot of variety there, and no two games need to be the same. It was actually a lot of fun playing duelling doks, a game where both combatants were less combat oriented, and relied more on their specialist abilities to grab victory. 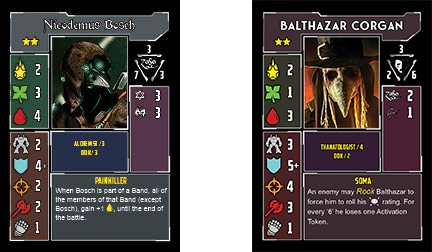 In case you’re wondering, it was Corgan by a headshot…

There’s still a lot of work to do before the next playtest, but I’m on the right track, and getting closer…