It was a terrible year for me professionally and personally. As a result, I think I got less done that whole year than I did in the 3 months I spent on my thesis. This was exacerbated by the fact that, one year after receiving my MFA, I’m still working as a substitute teacher and, in December, had to take part time work at a retail store just to make ends not quite meet.

And just to give me a good kick before exiting stage right, the year ended with my wife getting majorly ill during the week of Christmas. Good riddance 2014, don’t let the door hit ya where the good Lord split ya.

But now it is 2015. A new year and a new stab at getting the next phase in my life and career started. Getting a job has been a bust so far, but at least I had an interview. Finally. After over a year trying. I do, however sense a change, a sense of positive renewal, as the Doctor once said in ‘The Twin Dilemma.’

So, what about all the games I have been working on? 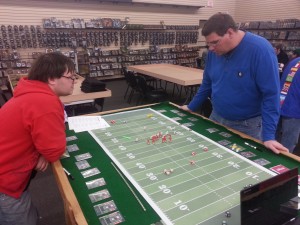 I started this as a thesis project and it turned into what is considered by quite a few people to be an excellent playable simulation of professional football. What many do not know is that I took the game to Topps in September of last year and nearly sold it to them. Unfortunately, after consideration, they found it a bit too complex for their customer base, so no sell, but they did tell me that is was very true to the game and want me to call them up if I have any more game ideas (I may try and sell them a Baseball or Hockey game in the near future, time will tell).

So, with  the feedback from them and working out some strategic issues with a college football coach, I am on the verge of taking the game to another company. Problem is, I need to rewrite a small chunk of it, including remaking about 108 cards, and after a year and some change, I’m kind of burnt out. So, I’m giving it a rest for a month so I can come at it fresh.

The cool news is, I’m ready to release a print and play demo after I get the new cards done and will do so, probably in March. I’ll also be taking it to another company to try and sell it, and possibly get a proper job. In the meantime… 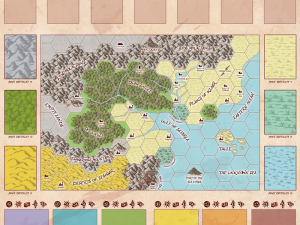 The Barbarians of Lemuria board game I designed has been done for over a year. In that time, I have tried, without success, to get it into physical production. Now, as you might have ascertained from the start of this post, I am not in the position to self-finance this thing. There is too much risk, especially when you consider there is more to producing a physical game than calling up China and sending them some files. There’s production costs, shipping costs, storage costs, distribution costs, etc. So I’ve given up on producing a lavish table to board game and am switching formats.

I’ve been a huge proponent of mobile technology as a platform for board gaming and RPGs for the last 5 years. At UTD, I spent a great deal of my time trying to convince the people in charge that not only were mobile games going to increasingly challenge AAA games for entertainment dollars, but that hybrid games, using table-top components and digital interfaces, were going to eventually become the norm, allowing for incredibly complex board game simulations. Flash forward to today and we now have X-Com the board game with its mobile interface, Golem Arcana, a digitally enhanced TT wargame and a host of completely digital mobile board games.

So I’m turning For Glory! into a digital board game app.The potential audience is larger, the production costs are smaller (just time, really) and without shipping, distribution, storage, and a production company taking up at least 50% of the profit (Google Play and iTunes stores only take 30%), the profit margin will be much higher. I’m currently working on the UI screens and my programming partner is going to use Unity’s 2D platform to realize it as software. The game will be pretty much the same, it will even be designed so up to 6 can play, but it will handle all the rules work for the players. You can see the aesthetic feel I’m going for in this incomplete rough of the character select screen. 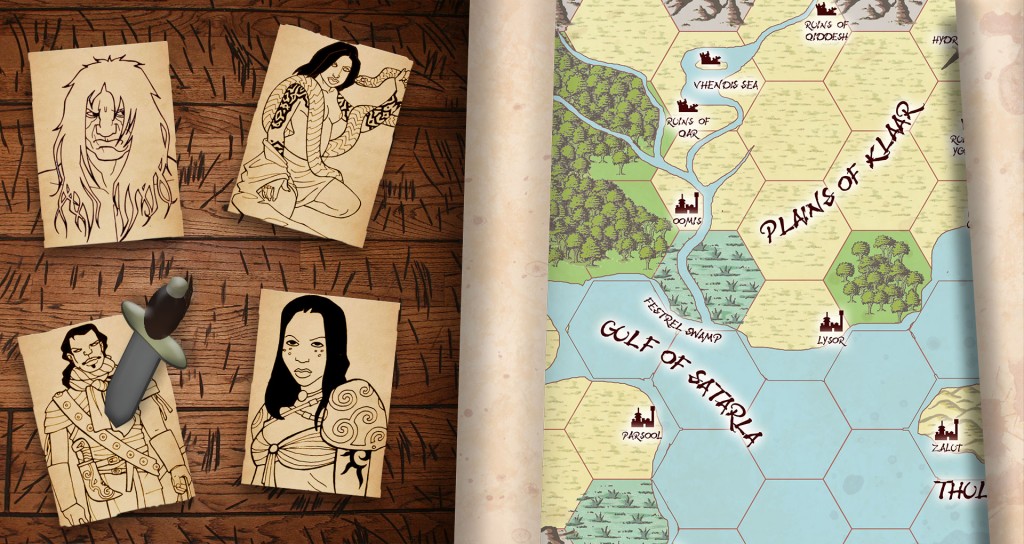 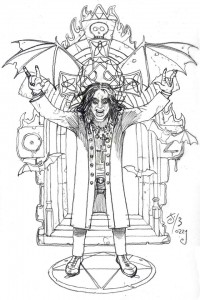 People have told me what a unique concept BoHM is, and how they’d love to see it realized. My first attempt at doing that ended in a failed Kickstarter and a lot of rather pointed comments from my target audience about how unwelcome a truly digital table-top RPG is. Problem is, I don’t want to do another strictly P&P book RPG. I want to do something different. And besides, the same problems with a print boardgame apply to print RPGs, but doubly so. As a real world example, my Barbarians of the Aftermath supplement has yet to sell through its 2010 hardcover print run (as far as I know. C7 hasn’t sent me a sales report in over a year) but the 2009 PDF still sells to this very day!

So, as the IP was important to me, but the format really wasn’t (although I would have loved to have  been the one who revolutionized the RPG industry with a digital TTRPG), I tucked it away until I could find another medium for it, instead of rushing out yet another variation on the standard RPG. This month, I found that medium: the Tactical Card Game. 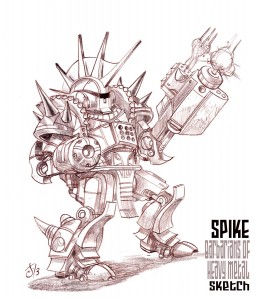 An idea I’ve been noodling around with for some time, the Tactical Card game is an attempt to model the strategy and tactics of tabletop wargaming using strictly cards. During my recent research into the history of wargaming (as a hobbyist and academic), I have identified a number of elements that define wargames and can be easily translated into an abstract card based system. The system uses dice, like a regular wargame, and it also has a tactical maneuver system, based on my system for vehicular combat in Barbarians of the Aftermath. But it doesn’t require miniatures, terrain models or even a large table to play.

I had been designing the TCG concept as a vehicle for the Pirate game my business partner has been working on for some time, but I realized it was also an excellent vehicle for introducing the BoHM universe. It allows me to focus on a specific part of that setting (Titans, giant heavy metal mecha, like the one above) and reach a less niche audience: casual card gamers. It can be easily expanded, into aerospace fighters, starships and even headbanger vs. headbanger musical dueling, and all those different games can be designed to work together so that you can have truly massive conflicts that cover multiple scales simultaneously (great for team tournament play). Plus, card games are cheap to produce and much more attractive to production houses.

So I’ve also been working on that. An example of the play area (which has already evolved significantly by this point) can be seen below. 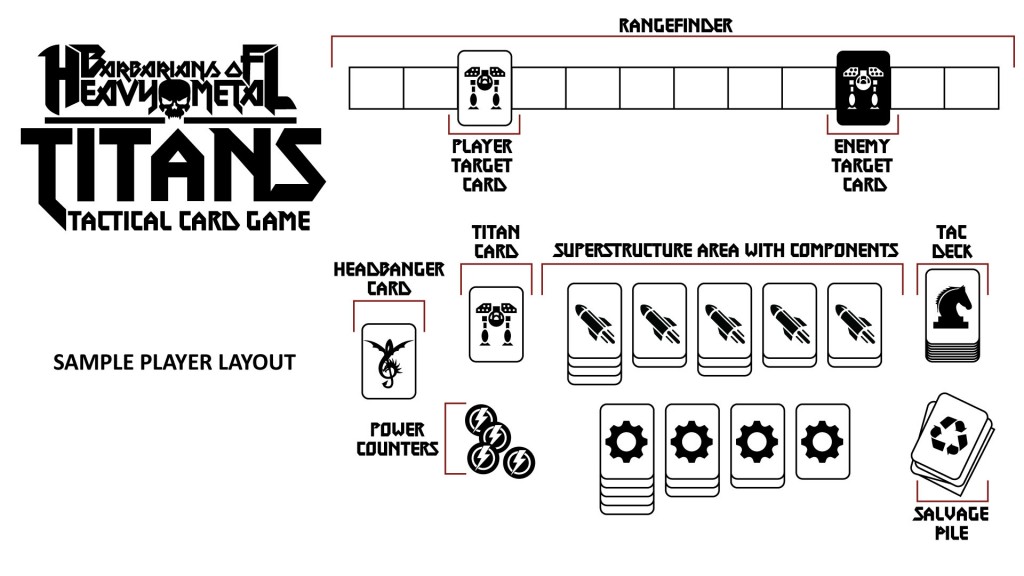 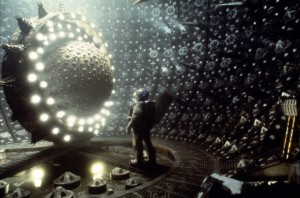 I’ve been fiddling on and off with this thing for ages now. It started off as a simple supplement for DCC, but I quickly realized this was not the best way to accomplish my goals for it. Then I built a system from scratch. And scratched it because it didn’t feel right for 70’s sci-fi.

And now I’m back to wondering if it wouldn’t work best as a digital TTRPG and how the might change the design. I love the idea of the game, but as with BoHM, I don’t just want to crap out another RPG. I want to make something that adds to the industry in a significantly different way, and truly inspires people to play it, like DCC. It’s simpler than BoHM, rules wise, and like the original D&D, there is no specific setting, just thematic tools for creating your own, so it might be the best game for introducing the DTTRPG concept.

The potential for expansion through in-app purchases are practically infinite, it would (again) reach a whole new audience and the costs would (again) be minimal, so I think it would be worth doing a small demo of the app to generate Kickstarter interest and that is the plan for now.

That’s My Year Full, Then

Those are my product plans for 2015, but no plan survives contact with the enemy (the enemy in this case being not fully employed and constantly scrambling to make ends meet), so there are no guarantees that even half of it will materialize. But I design games. It is not what I do, it is who I am. I could no sooner stop doing this than stop breathing, so I will continue to plug away at my projects until they are done and out the door, regardless of my situation. Expect to see at least one or two cool things from Jabberwocky in 2015…