Thinking about the title of last weeks post, it occurred to me that what I do is just a high tech version of the same thing artisans have done throughout history. I forge a piece (new ideas, text and mechanics), I pound it into shape (with my keyboard and constant revision) and then I add the personal touch (a certain voice, or style of art) that signifies my work. Writers, in essence are the literary equivalent of ironmongers. Wordmongers, if you will. So I’ve decided to list all my production updates under Metalworks from this point on. Pretentious? Maybe, but it has a certain masculine quality that appeals to my personal aesthetics.

BoHM: Titans is getting ready to go into the card prototyping stage. I’m going to draw up some rough sketches of what the cards look like, create them in Photoshop and Illustrator (tons of icons to draw up) and then paste in the information from my massive list of cards using InDesign.

As I mentioned, I have 6 Riders, 6 Titans with their systems and superstructure cards, and a TAC Deck of 60 cards for each Rider, for around 400 cards (251 unique) total. I won’t be creating any original art for these, oustide of the system icons, and most will have a blank spot for a picture unless I find some existing art that particularly fits well, but they should suffice for play-testing purposes.

Should take me about three weeks to get all of that work done, what with the other project at hand…

FOR GLORY! DIGITAL BOARD GAME

I’ve been slowly working on the UI for the game, in between fits of card design for BoHM, and have the Main select screen and Character Sheet screen sussed out. The imagery is all temporary placeholder stuff, and will be completely redone for the final game, but it should give you a good idea of how things are shaping up, aesthetically and functionally. 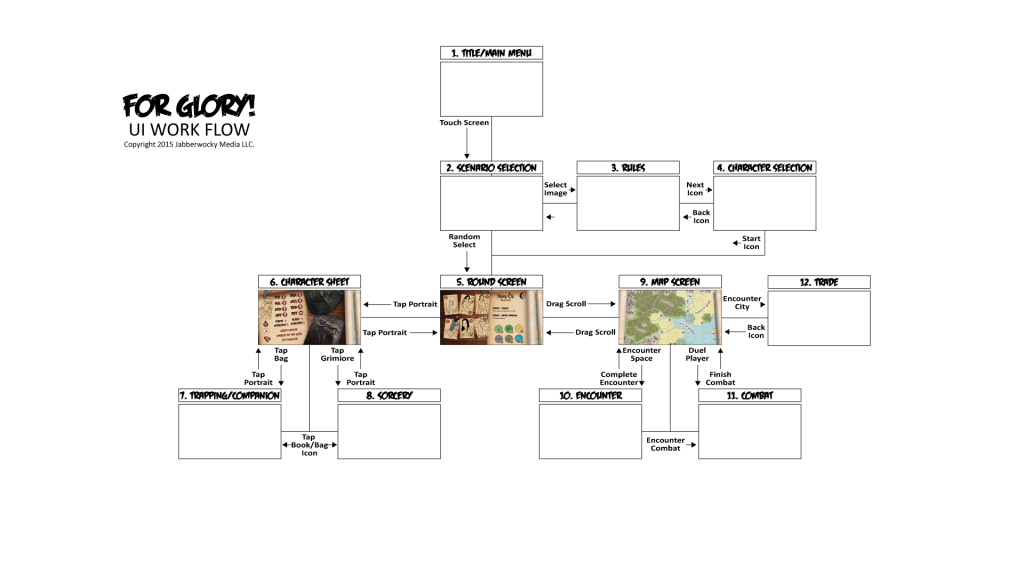 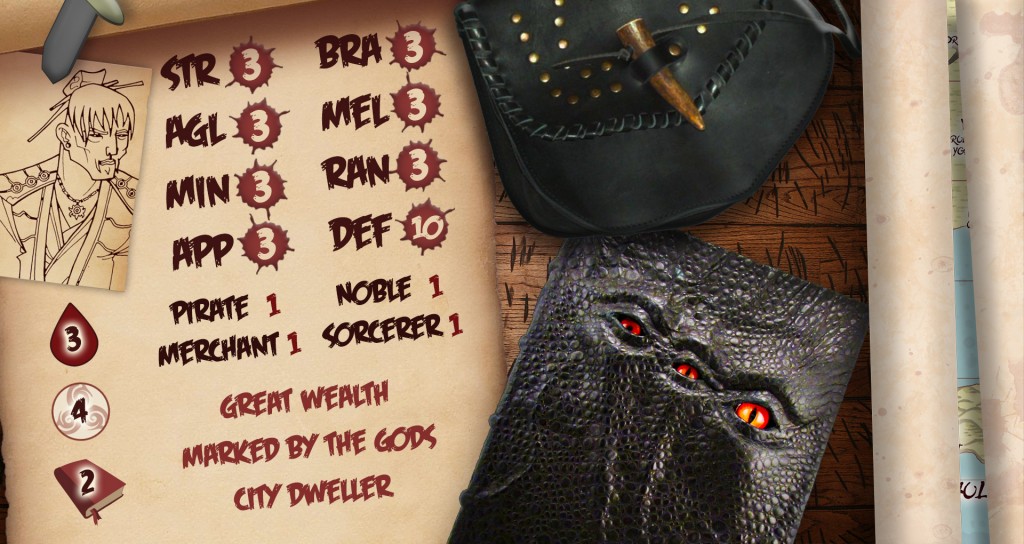 In related news, Simon Washbourne released the Barbarians of Lemuria: Mythic Edition recently, and inside it are a few small tweaks to the system that will have a knock on effect for the For Glory! design. Brawl is out and Initiative is in, so I’ll have to change those up in the game and redo a few cards to take those into account. The combat system has changed as well, but since FG! uses a more abstract system to reflect an entire combat using a few rolls, that won’t change much of anything in the board game. Sorcery might have been tweaked, but I’ll have to see if that necessitates a change in the more abstract level of sorcery in the board game.

The good news is, being a digital game, changing such things is much less of a problem than it would be once something has gone to print. Hooray for the digital medium!

Once the playtest cards for BoHM:Titans are ready for action, I’m going back to work on QBB. I need to create a new deck of cards and a new presentation piece for marketing to another major sports merchandising entity. I also plan to whip up a Print & Play rules set with the very basic rules and pieces necessary to get the feel of the game, as I did with For Glory!

At that point, the game is going to go through even more playtesting to sort out the bugs in the new Play system and ensure that it accurately reflects the way football operates from a coaching perspective. And of course, I’ll be streamlining the game even more along the way.

If I’m lucky, I might have this thing out by Christmas…